Note: this page hasn't been updated for many years now...

Extra note: it's now been even longer, and I shaved my head like 4 years ago and then grew a beard during lockdown, so not a single picture even looks like me, although I think they must all be at least 15 years old by now anyway!

So who is Ranulf anyway?

I guess I'm not normally in the habit of telling people who I am but here's a little synopsis anyway...

Most people know me as Ralf, not Ranulf. That started with a friend of mine at school, who decided that 2 syllables in a name was too many. His name was Matthew, and everyone called him Matt or Maff... Anyway, Ralf kind of stuck and now more people call me Ralf than Ranulf. But, Chief (as in Wigham) is right out. Got that?

I've been programming computers since I was about 8. I've spent more than half my professional career working in the games industry writing C++ and most of the rest of my career was spent writing business applications in Java.

I'm proud to have worked on the following games:

Outside work, I'm interested in all sorts of things. Languages are one of the things I keep coming back to. Currently, I'm learning Mandarin Chinese. I passed the HSK2 exam about 8 months after I started learning, and HSK3 about a year later. I'm somewhere around HSK4-5 standard now, and have no idea what standard I'll be when the levels get shaken up next year.

Other languages are interesting to me too. About a decade ago, I studied Bliblical Greek for about a year, and I still remember quite a lot of the French I studied at school and occasionally practice at the Language Cafe. I've also studied Latin and Spanish, and pkicked up a bit of German along the way, but these all need quite a lot of work!

A few years ago, got into FPGA development, having and designed three revisions of my own FPGA development board, CPC2013, had some boards made up and learned how to solder really small things! There's a blog about my FPGA development too. I'm currently working on an FPGA-based emulator for the Amstrad CPC to run on my board, and writing the occasional demo for the now 30-year old computer to test out the functionality. My first released demo, Sugarlumps won the "oldschool" competition at the Sundown demo party in 2012 and I've been spotted at other demoparties too such as Revision and even came second there with another demo, Breaking Baud - a tape loading demo for the Amstrad CPC. One year at Revision, we were interviewed by the local newspaper and so I managed to get my photo in a German newspaper article covering the event!

History of my name

The name itself is derived from Old English, being originally Randwulf, meaning Wolf-shield or Protector against wolves. It was fairly common in the 14th century, and seems to have fallen out of common usage, although derivatives such as Ralph, Ralf and Randolph live on.

According to Baby names

Your name of Ranulf has created the desire to focus on the details of your immediate interests to the extent that others consider you to be fussy. You are attracted to, and could excel in, the mechanical or technical fields, such as computers. Instead of establishing the system and order you would like, you are over-particular in some things that matter to you personally but lax and indulgent in other ways. You place great importance on whatever you happen to be interested in, and can be quite thorough and detailed in what you are doing, but find it difficult to be consistent. You scatter your efforts when things becomes too monotonous. You have intense urges and feelings for which you can find no expression. At times you are motivated more by moods and desires than by sound logic and reason, and under conditions of stress you could react inadvertently in temper or stubbornness that you would regret later. The indulgences prompted by this name can lead to high blood pressure and its relative ailments, as well as nervous tension affecting the whole nervous system.

And who am I to argue?

This picture is getting quite old now, maybe 10 years ago now, but it always makes me smile... :) 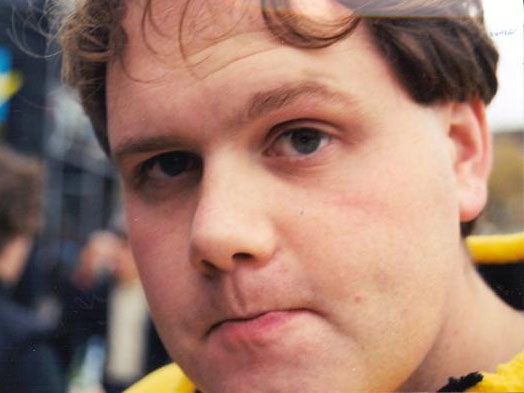 I think it was taken at the Hannover Expo, which would make it from 2000, but I can't be totally sure that was where it was. I still have the bright yellow jumper too, hiding in the back of my wardrobe!

All content in this page copyright © Ranulf Doswell unless otherwise noted.